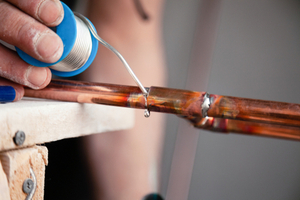 Modern copper pipes should last for 20 years or more. Unfortunately, that doesn’t always happen, thanks to a particularly pernicious plumbing problem known as pinhole leaking. Pinhole leaks only occur in copper pipe. Under the right (worst) conditions, copper pipe may develop pinhole leaks within only two years of installation.

What is a pinhole leak?

The State of Maryland Task Force to Study Pinhole Leaks in Copper Plumbing defines pinhole leaks as, “the perforation of copper tube, pipe or fittings used for domestic water distribution as the result of pitting corrosion initiated on the interior/waterside surface with the subsequent leakage of water.”

Pinhole leaks are generally very small (often less than ⅛” wide) and shaped like pinholes, hence the name. A pinhole leak itself represents the final “burst through” of a worsening corrosion problem on the interior of a copper pipe. In other words, pinhole leaks are not only a problem in and of themselves; they also represent the manifestation of long-term corrosion damage.

How does a pinhole leak in copper pipe occur? 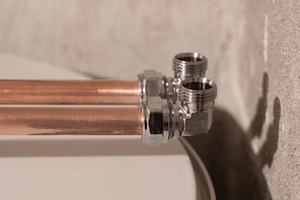 As the Maryland Task Force notes above, pinhole leaks are caused by “pitting corrosion.” The Association for Materials Protection and Performance defines pitting corrosion as “is a localized form of corrosion by which cavities or ‘holes’ are produced in the material.“ Pitting corrosion only affects a very small portion of a copper pipe, eventually wearing away material more and more until it falls in on itself as a “pit” or “hole” – which, in turn, becomes a pinhole leak.

According to the Task Force’s research, pitting corrosion occurs for one of three reasons:

Chemical or mechanical damage to the protective oxide film that coats copper pipe,Localized damage to or poor application of protective coating, orThe presence of non-uniformities in the metal structure of the component, e.g. nonmetallic inclusions.

Any of these three inciting conditions could cause your pinhole leak in copper pipe in the following ways:

This is the most likely cause of your pinhole leak in copper pipe. Your home water’s ph value has little to no bearing on your water’s quality or safety, but it can affect your pipes. In its own investigation of pinhole leak in copper pipe, the city of Folsom found four different ways water’s ph value could interact with its sulfate content, temperature, bacteria, and/or piping metal to produce the conditions for copper pitting.

Should any of these conditions occur in your pipes, then the chemical reaction will eat away at the protective oxide coating insulating the inner pipes metal from the water running through them. When this coating wears away completely in small places, then that small portion of the pipe is highly vulnerable to corrosion – hence, a pinhole leak forms.

Physical contaminants such as sediment or heavy metals present in the water supply may wear away at the inside of your pipes as they pass through. This could occur if your water is particularly hard or only locally treated (if it’s well water, for instance). Abnormally high water pressure may also scrape away the oxide coating of copper piping over time.

It is unlikely but not impossible that your copper pipes are either of a poor quality or were improperly installed. This is more likely if your pipes were retrofitted and/or installed unprofessionally. Damaged copper pipes may not possess the same resistance to corrosion as they should, which can lead to pinhole leaking and other problems.

Non-uniformities in the metal structure

This is particularly likely if your pipes were only partially retrofitted into your home, ie: if your home uses both copper pipes and another type of metal for either piping or connective joints. When two different metals interact, especially in a solvent like water, the resulting tension can wear away at both. In the case of copper pipes, this tension will wear away at the oxide coating inside your pipes, eventually leading to pinhole leaks.

What are the signs there is a pinhole leak in my copper pipe? 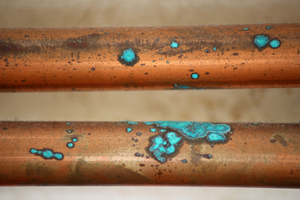 If you suspect you may have a pinhole leak in copper pipe, look for any of the following signs:

Higher water bill: All leaks will raise your water bill, no matter how smallLower water pressure: Pressure leaks out of pinhole leaks just like water does, which will result in lower water pressure throughout your homeDripping sounds: Try to follow the sound to the leak itself, if possibleWater damage: Especially under or around your pipesMold or mildew growth: Especially near your pipesCondensation on your pipes: The outside of your pipes should never feel moist or wetPipe discoloration: If your copper pipes ever look too brown, green, or blue, then it means they’re partially oxidizing

However, keep in mind that pinhole leaks are notoriously difficult to find. After all, they’re very small and they can occur anywhere along a copper pipe. The best way to look for leaks is to turn off your water and check your water meter. If you’re sure you’ve turned off the supply but the water meter is still moving, then you have a leak. If you have copper piping and a leak, then it stands to reason you may have a pinhole leak.

How not to fix pinhole leak in copper pipe

Before we teach you how to fix your pinhole leaks, it’s important you learn what not to do. This is because there’s a lot of bad advice about repairing pinhole leaks out there. Not only are most of the DIY fixes you can read about ineffective, but in many cases they’ll create new problems.

For instance, you shouldn’t use either pipe repair clamps or replacement pipes affixed with couplings. Pipe repair clamps are fundamentally a temporary solution. They may even introduce chemical and metal alterations to your water, which can further wear away at the pipe. Likewise, couplings and replacement pipe negatively interact with the copper in your pipes. This can create the tension that wears away at oxide coating referred to above. By applying either of these methods to your pinhole leak, you might create a big problem by trying to solve a little one!

How to fix pinhole leak in copper pipe 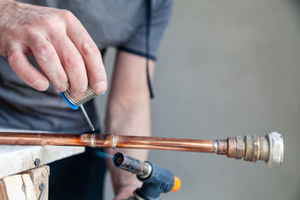 The only truly effective way to fix pinhole leaks in copper pipes is via the “sweating” replacement method. While you can find everything you need to attempt sweat coupling yourself at hardware stores, we generally don’t recommend homeowners try it themselves because it involves soldering and requires significant experience. If you insist on attempting sweat soldering yourself, however, or you’re just curious how it works, this is an overview:

NOTE: sweating pipe replacements are only recommended if you have to repair ½” of copper pipe or less. If the replacement job proves to require more significant replacement, you should call a professional.

Locate and mark the leak on your pipeTurn off the water main! (this is important!)Drain the pipe of waterCut up to ½” of damaged section and surrounding pipe out using the tube cutterDry the new openings created by cutting away the damaged section. Stuff each side with the cotton rags to keep them from getting wet again. Only remove these cotton rags right before you solderMeasure the gap created by removing the damaged sectionMeasure and cut a replacement section of sweat coupling replacement pipe that’s 1” longer than the gap’s measurementSmooth the rough edges of the replacement pipe with the cutterSmooth the rough inner edges of the pipe with the wire fitting brushClean and smooth the cut sections of attached pipe, as you did with the replacement sectionSlide the sweat coupling replacement pipe over each end of the remaining pipes. Make sure about ½” of the replacement pipe fits over the old sectionSolder the new joint by holding the torch to one side and the tip of the solder wire to the other until enough of the wire melts into the opening to completely fill itTurn on the water and test the repair

How to prevent pinhole leaks in copper pipes

With a little investment and diligence, you can prevent the problems that create a pinhole leak in copper pipe listed above. Here’s how to make sure each one doesn’t give you grief:

The chemical interactions that wear away at copper pipes typically occur because of high ph value in your water. Investing in a water softener can help prevent the kind of ph values that will harm your copper pipes. If you already have a water softener, make sure it’s functioning correctly and adjust it as needed.

A water softener will also remove many of the contaminants that could scrape up your copper pipes over time.

Water softeners won’t affect your water pressure, however. If your water pressure seems abnormally high, you may have to take other measures. Check the pressure meter on your water main. If it seems much too high, then you should ask your municipal water supplier why. If they can’t determine a cause, invest in a water pressure limiter to keep high pressure from hurting your pipes.

If your pipes were improperly installed or look damaged, then we highly recommend replacing them as soon as possible. A professional plumbing inspection can tell you if you need to replace your pipes or if less major fixes are possible.

Non-uniformities in the metal structure

It may be possible to replace outdated joints, fittings, or old segments of pipe used throughout your home. We recommend a professional plumbing inspection to determine where the problematic pipe material is and what we should do about it.

Pinhole leak in copper pipe is a frustratingly common and significant problem for homeowners throughout the US. Fortunately, it’s also an easily fixed problem. If you think you may have a pinhole leak in your copper pipes, all you have to do is call Mike Diamond.

The Smell Good experts can find your pinhole leaks, fix them, and help you make sure they don’t happen again. Your copper pipes are far too effective (not to mention expensive!) for you to tolerate leaks, no matter how small. So stop tolerating and call now!

The post What You Should Know About Pinhole Leak in Copper Pipe appeared first on Mike Diamond Services.